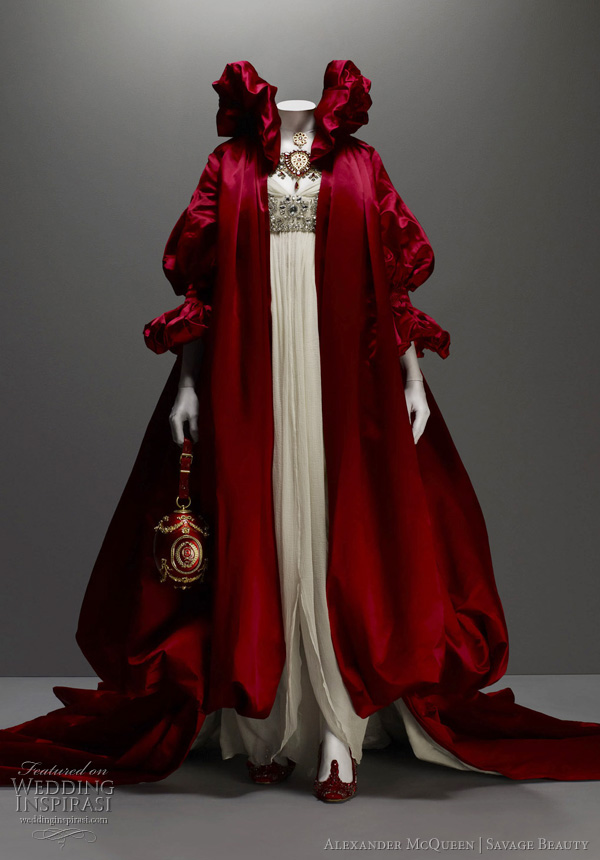 Dresses of sublime beauty from Alexander McQueen “Savage Beauty” exhibition. These romantic works of art heavily feature royal and historical references, some of the recurring themes in McQueen’s works. Above, regal coat of red silk satin and empire waist dress of ivory silk chiffon embroidered with crystal beads from “The Girl Who Lived in the Tree”, Fall 2008. Below, cream silk tulle and lace gown from “Widows of Culloden”, Fall 2006. Now that long sleeves lace wedding dresses are in trend, thanks to Kate Middleton, wouldn’t this creation make an exquisite vintage-inspired wedding gown? 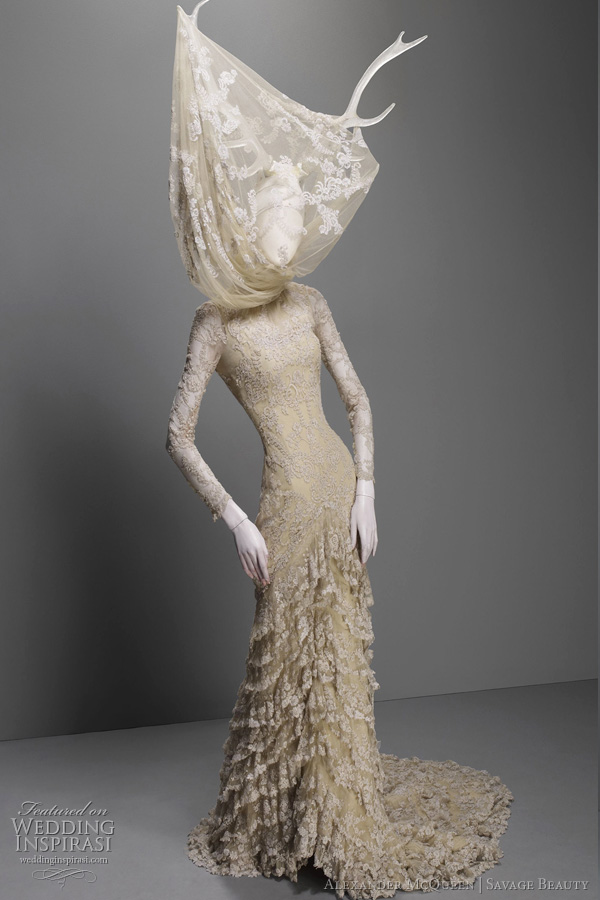 McQueen learned to apply softness and lightness in his style after his stint at Givenchy. “Oyster” dress, “Irere”, Spring/Summer 2003. Georgette and chiffon dress skirt made of hundreds of layers of silk organza. The layered skirt in a style similar to this has only became more commonly seen on wedding dresses from other designers in recent years. 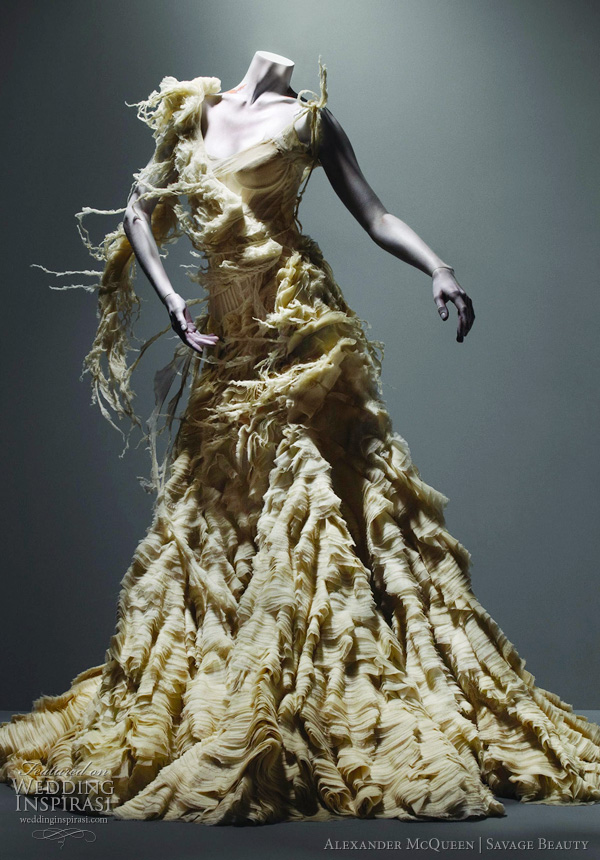 Pheasant feather long sleeve dress with elongated bodice based on gowns from the 1890s , “Widows of Culloden” collection, Autumn 2006. “Birds in flight fascinate me. I admire eagles and falcons. I’m inspired by a feather but also its color, its graphics, its weightlessness and its engineering. It’s so elaborate. In fact I try and transpose the beauty of a bird to women.” 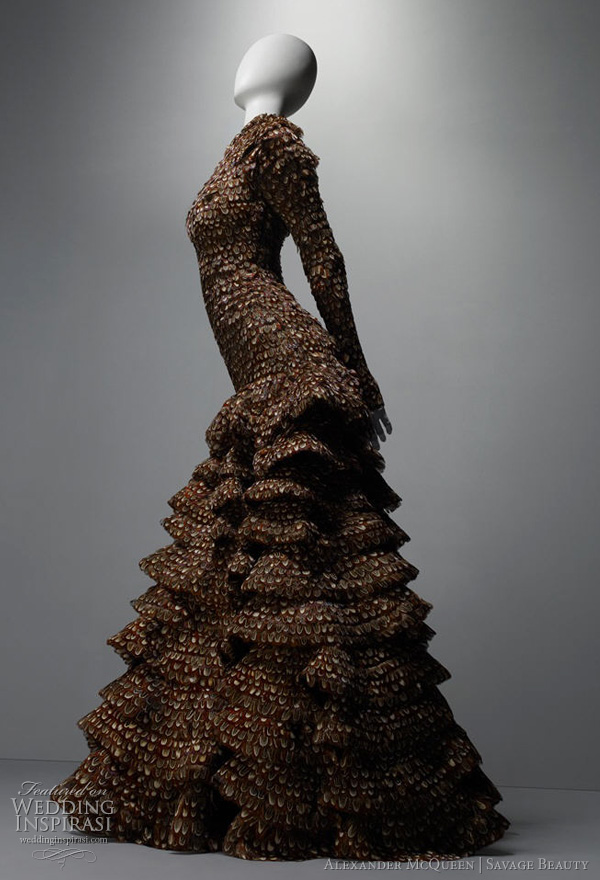 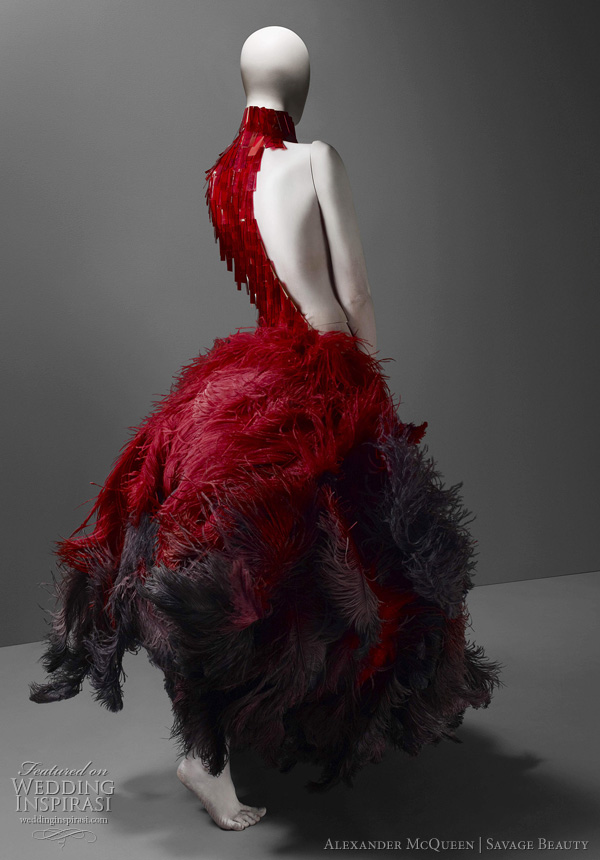 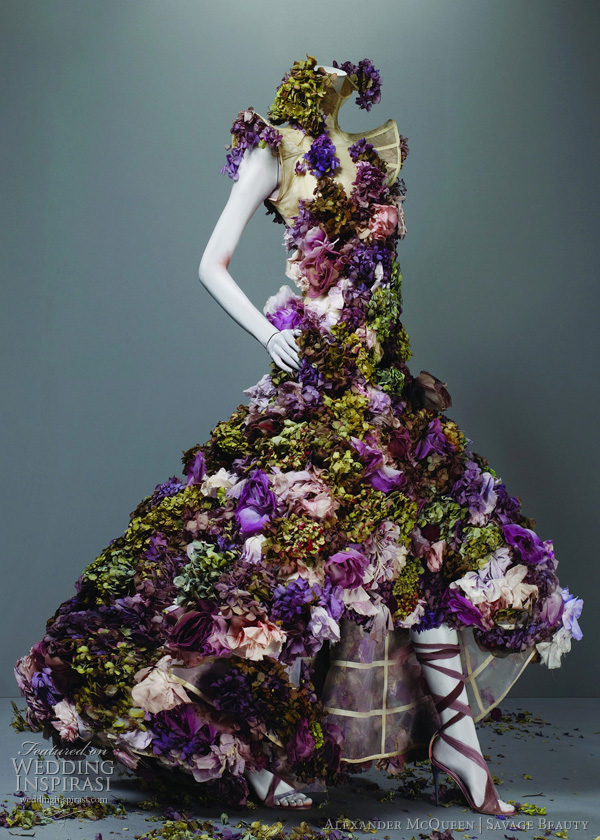 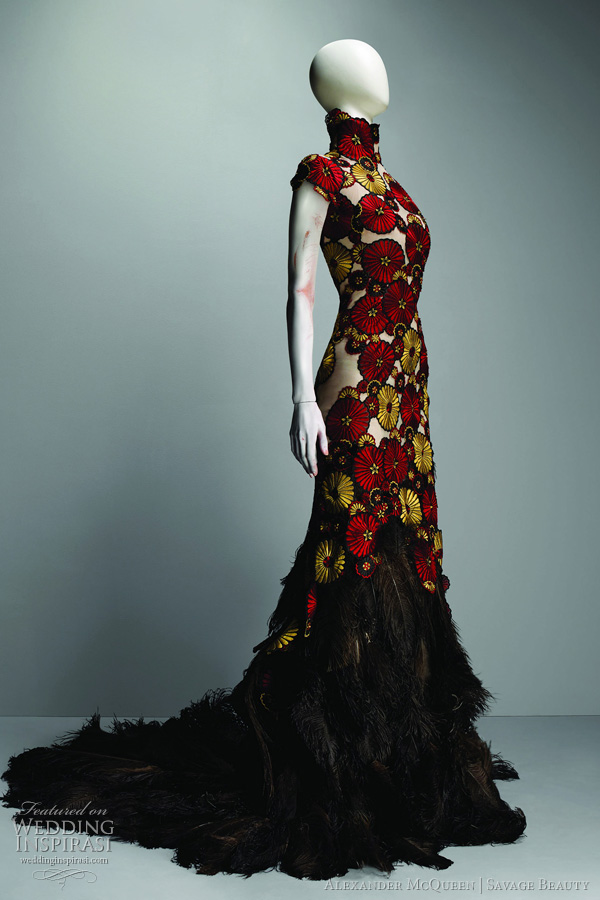 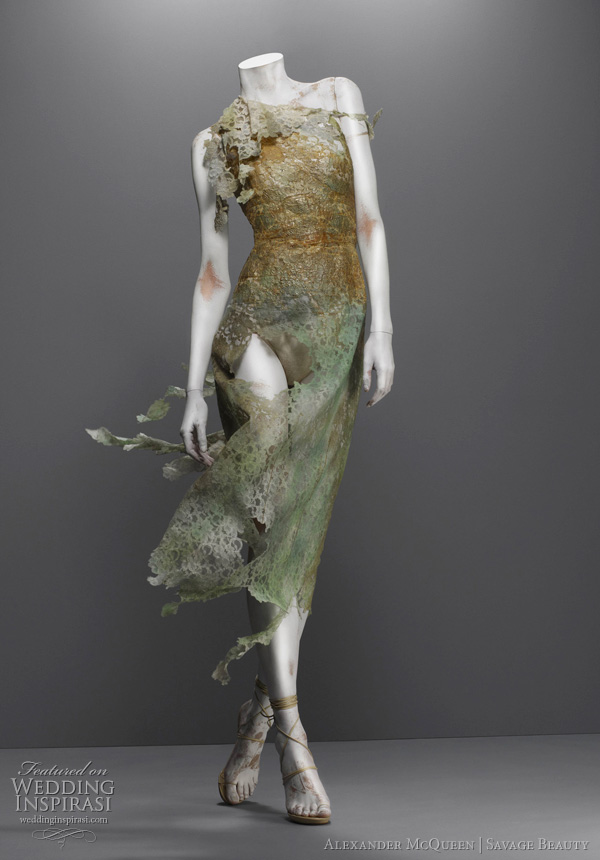 Jacket of red silk velvet embroidered with gold bullion and trimmed with white shearling worn with ivory silk tulle dress, "The Girl Who Lived in the Tree", Autumn 2008. “[In this collection, the image of a woman I had in mind] was a feral creature living in the tree. When she decided to descend to earth, she transformed into a princess.” 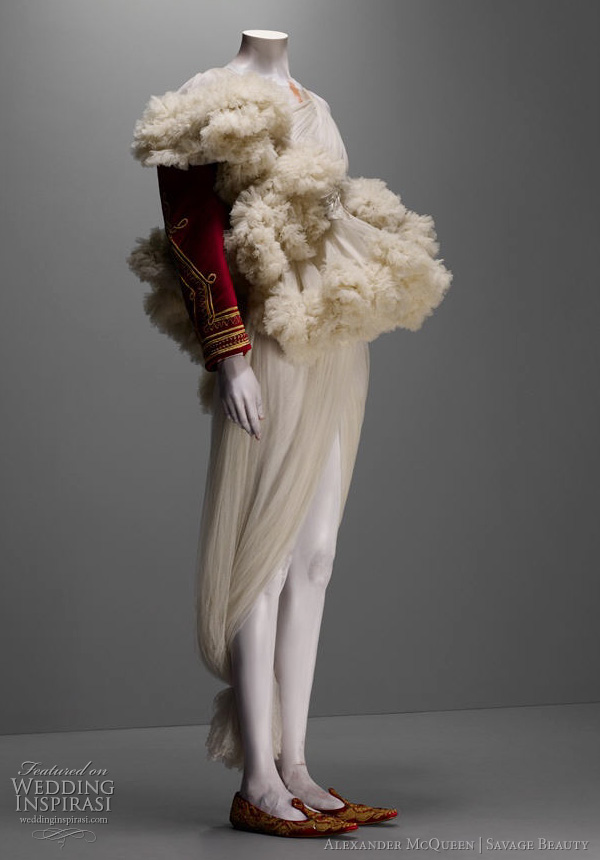 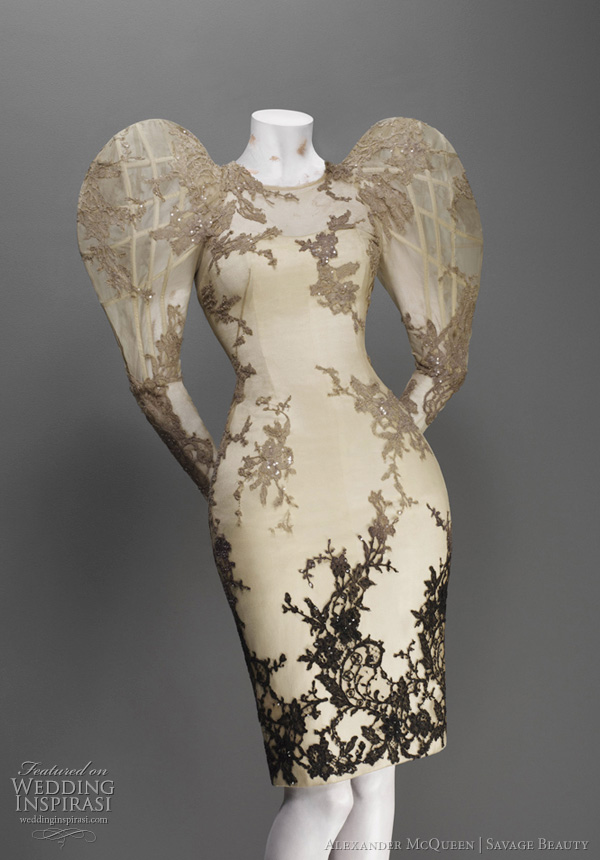 Dress made out of black duck feathers "The Horn of Plenty", Autumn 2009. We remembered this dress vividly on images from the runway -- the exaggerated makeup the model had and that extreme silhouette -- nipped waist, huge shoulders and hip -- that was said to be inspired by haute couture in the 1950s. 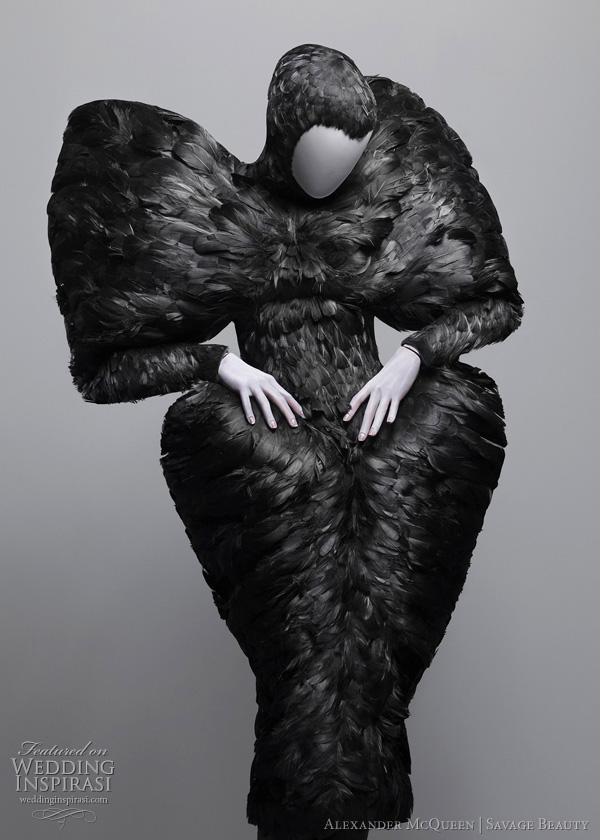 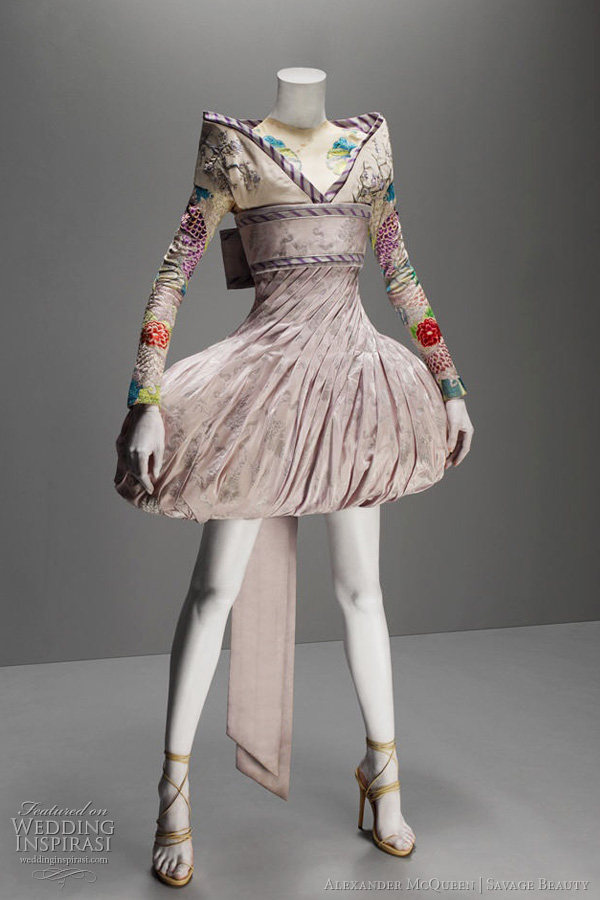 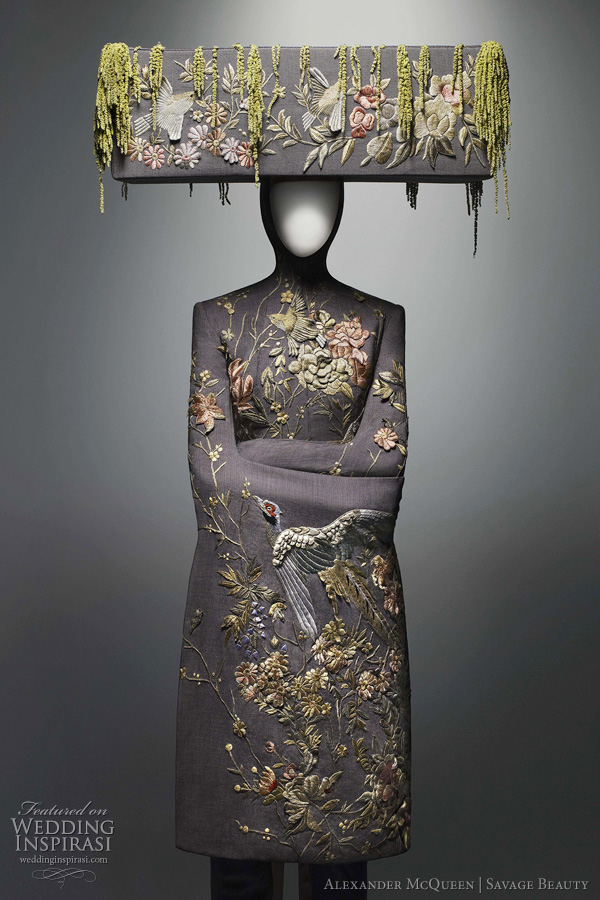 It's hard for us to talk about Alexander McQueen without being a tad emotional and melodratic but we tried! “You’ve got to know the rules to break them. That’s what I’m here for, to demolish the rules but to keep the tradition.”—Alexander McQueen

We DO NOT SELL the wedding dresses or any of the items featured on our website. Please read Buyer Beware and our FAQs to find out more. For information on PRICES and how and where to buy the products or services featured, please visit the website of the company indicated on the credit line at the end of the post.